Learn how simple Rhododendron care actually is with these easy tips on how to grow beautiful Azalea and Rhododendron bushes. 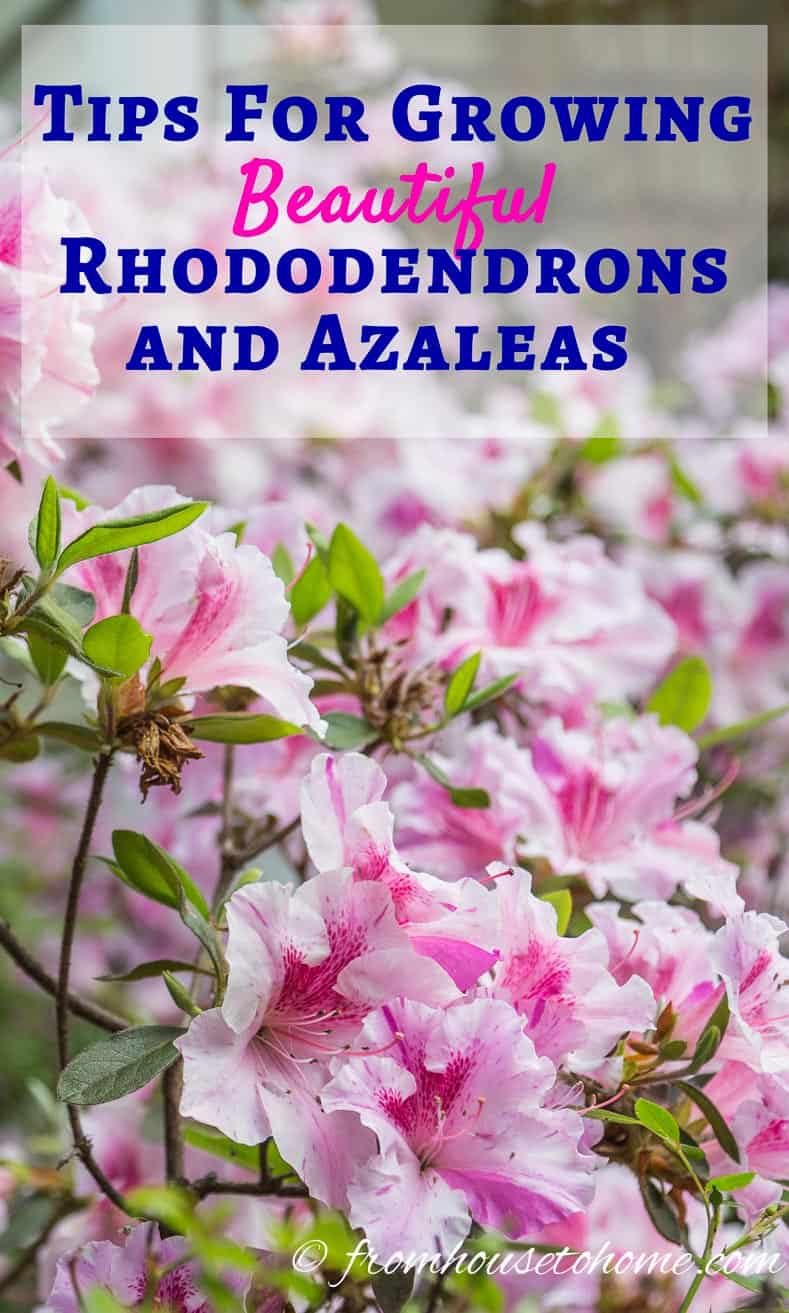 Rhododendrons are one of the very first shade bushes I ever planted way back in my very first garden.

I remember how amazed I was that there was a shade-loving shrub which was evergreen and had such beautiful blooms in the spring.

And now that I’ve grown them for so many years, I still love them. Especially since Rhododendron care is so easy!

In the years since I started gardening, I’ve expanded my selections to include many varieties of Azaleas as well.  They are also part of the Rhododendron family but are not all evergreen.

A little confusing I know.  Azaleas and Rhododendrons are both referring to different varieties of Rhododendron.  Why some get a common name (like Azalea) and some still go by the species name (Rhododendron), I’m not sure.

However, generally speaking, Azaleas and Rhododendrons require the same type of care and (very little) maintenance so I always think of them as part of the same group.

Keep reading to find out all the details of growing and caring for Rhododendrons and Azaleas.

Pick Plants For Your Zone 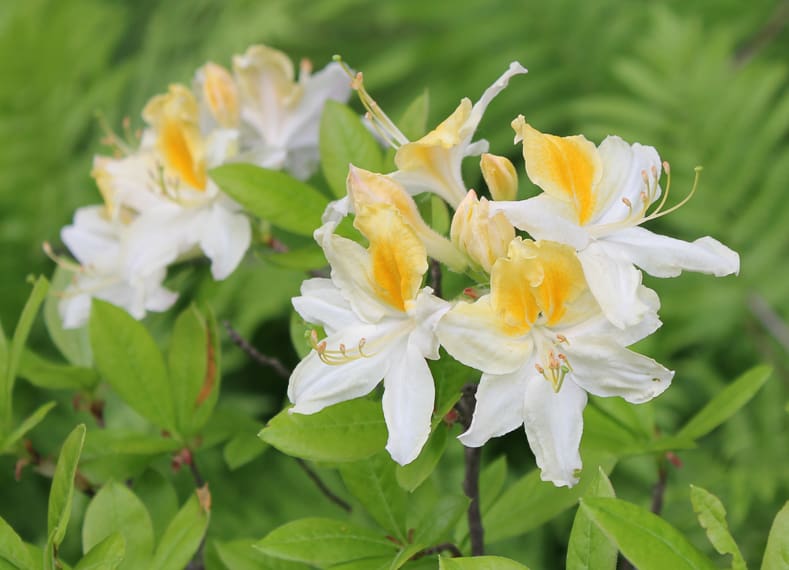 Depending on the variety, you can find Rhododendrons and Azaleas that grow in zones 3 – 9.

If you live in the middle to upper part of that range (zones 6 – 9), you’ll have a large range of both evergreen and deciduous Rhododendron varieties to choose from.

On the cold end of the range, deciduous Azaleas are usually your best bet.

They are listed as surviving to zone 3, but some people say that they have grown the ‘Northern Lights’ variety of Azaleas as far north as Zone 2! So if you live that far North and are willing to take a chance, that might be worth a try!

Plant In The Right Light 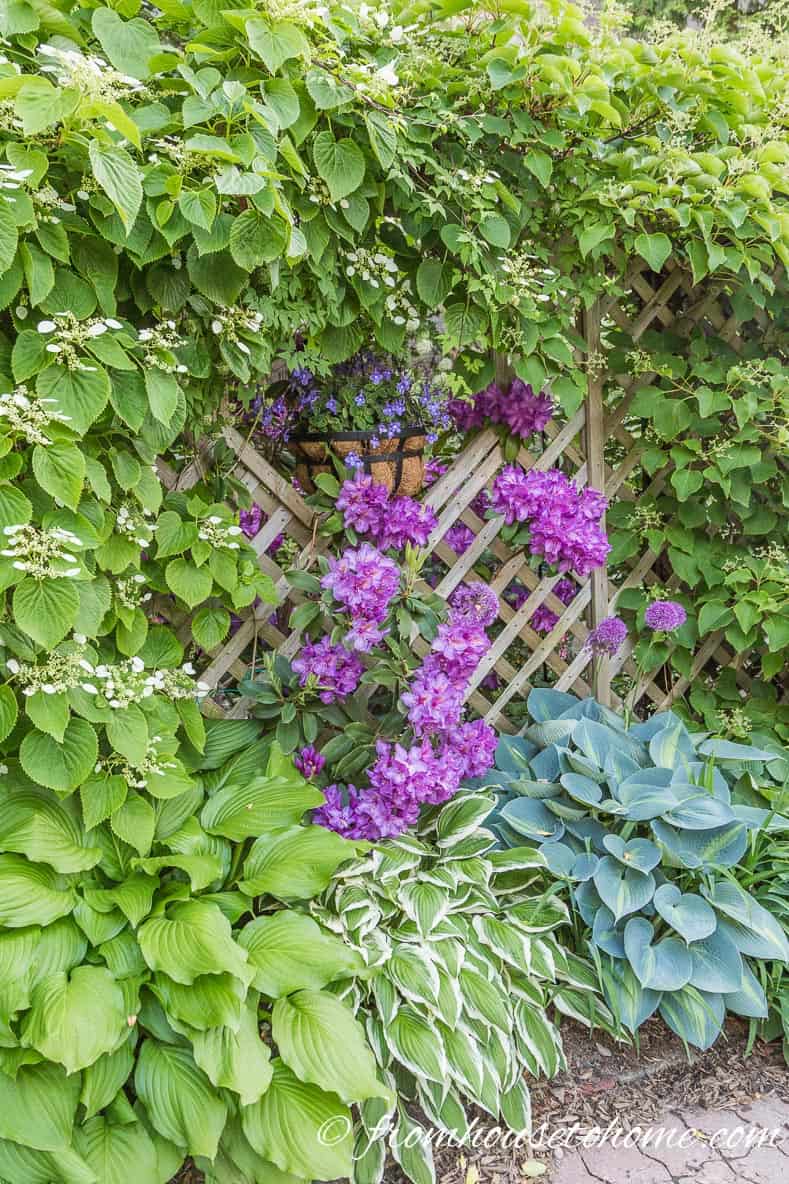 Most rhododendrons prefer part shade to shade, or being planted under trees where they get dappled sunshine.

However, there are some varieties like the PJM Rhododendron pictured below that actually bloom better in full sun. So be sure to check the label on the variety. 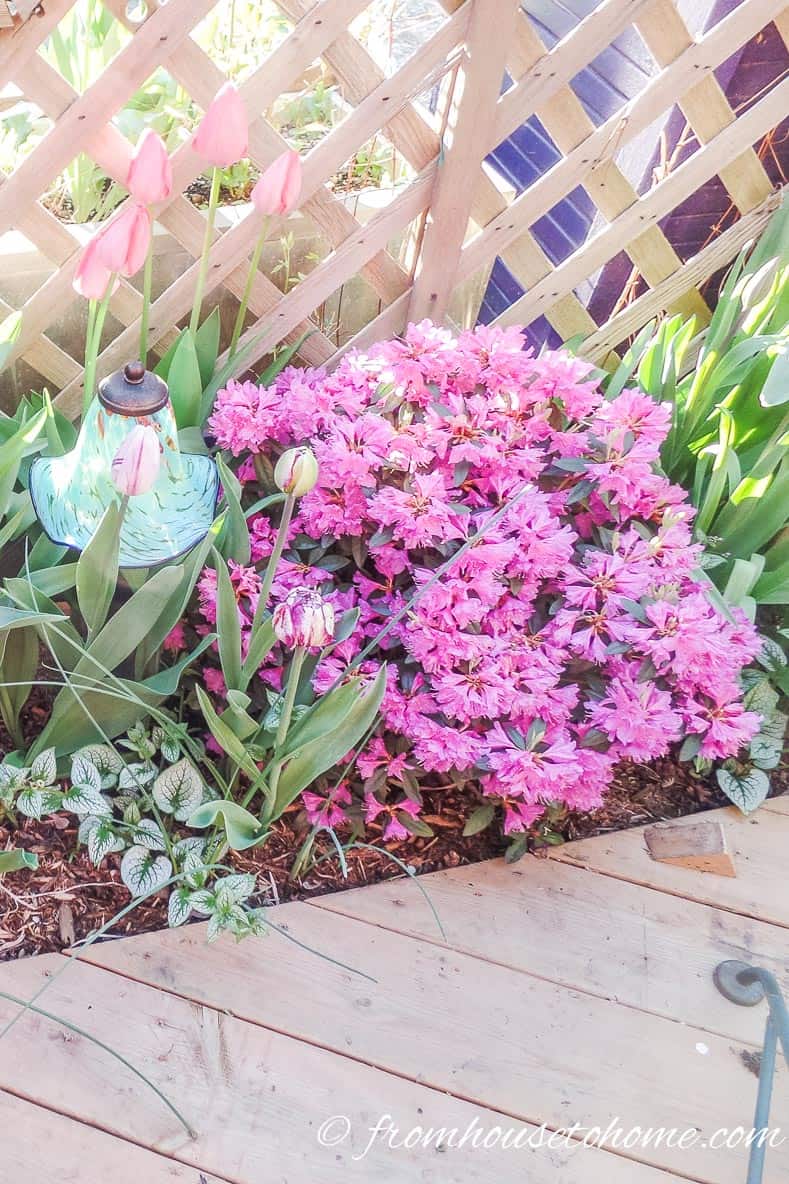 As with most plants, the further north you live, the more sun they can usually take. 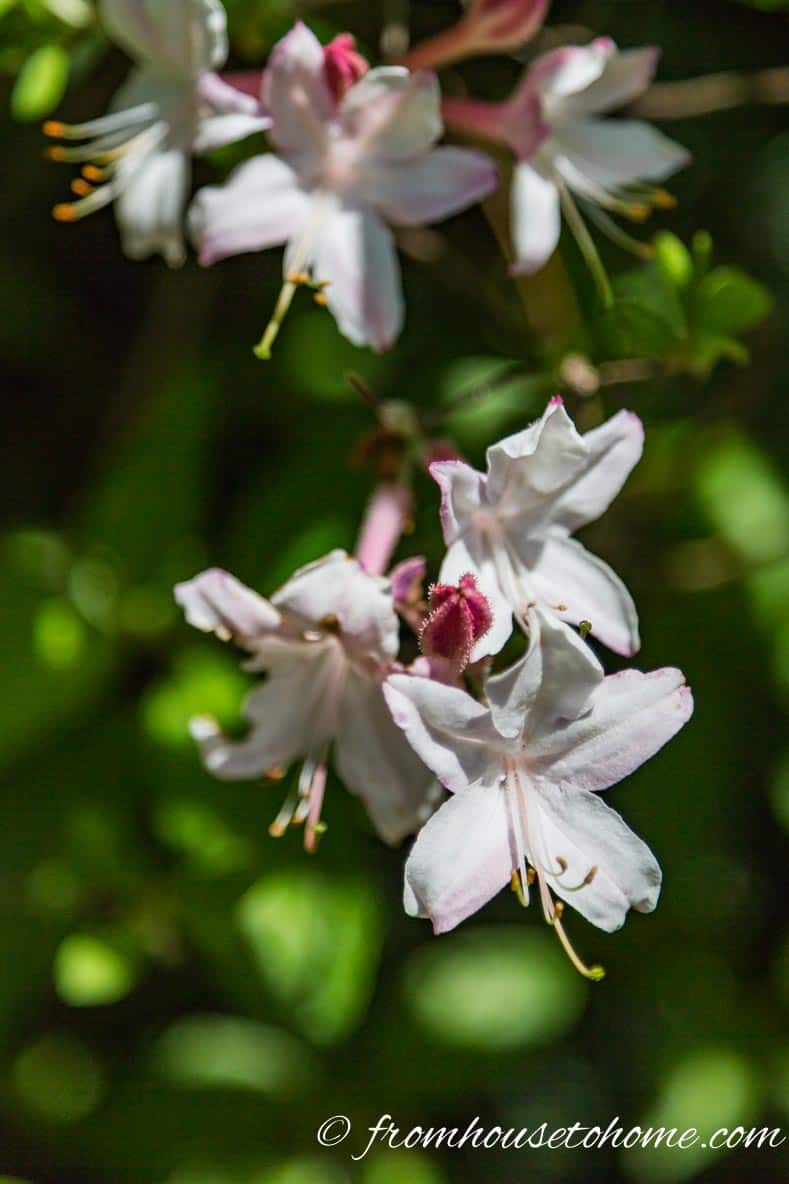 Like many woodland plants, Rhododendrons and Azaleas require acidic soil to grow well.

Their leaves will start to turn yellow, and the plant will look quite unhealthy if the soil is too alkaline.

Where I live, the soil is naturally acidic so I don’t have to do much to it. But if your garden isn’t, adding peat moss to the soil when you are planting your Rhododendrons will help. 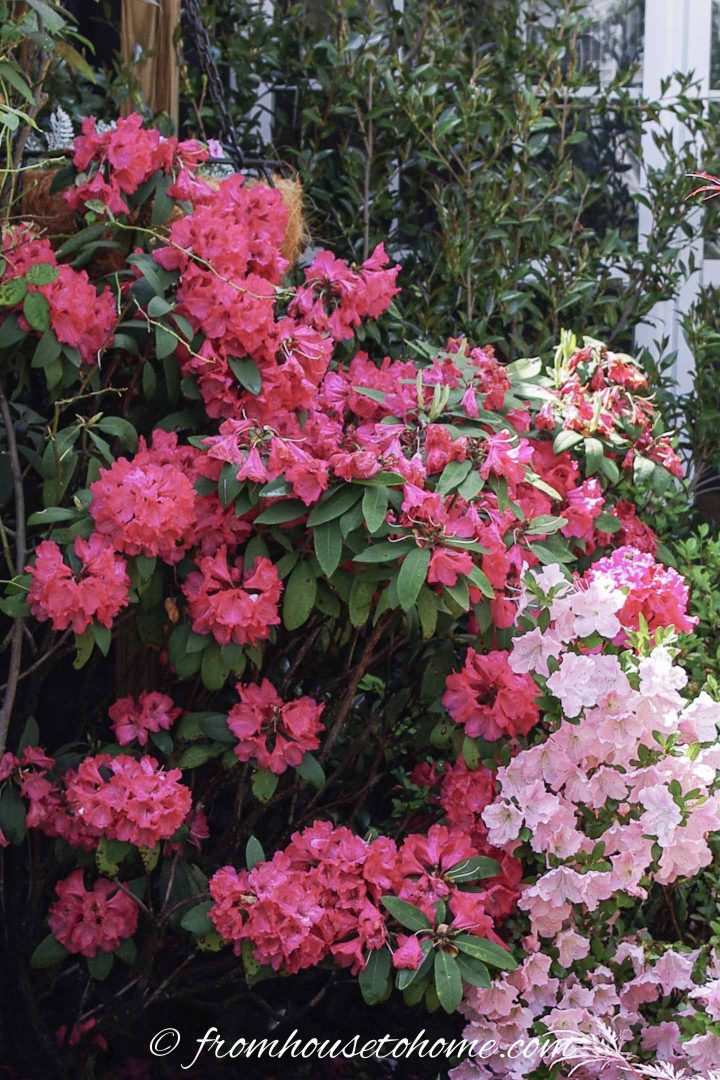 For established plants, spreading some peat moss around the base of the plants once a year can benefit them. 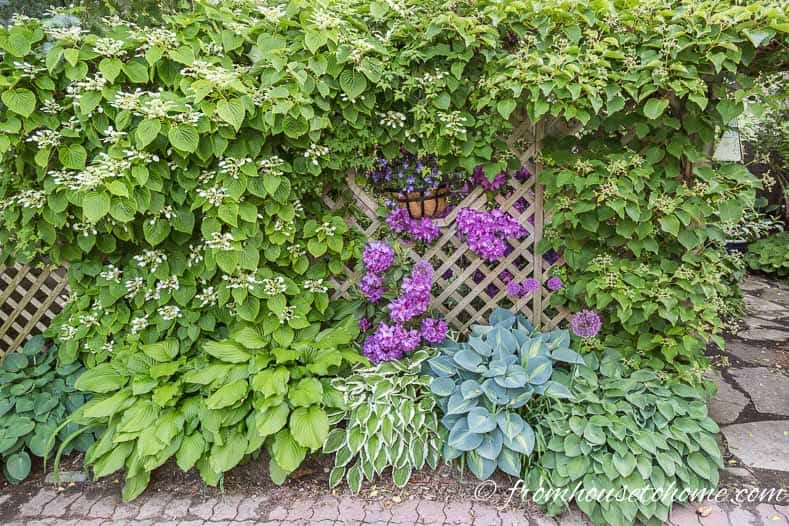 All Rhododendrons and Azaleas need to be well-watered, requiring at least 1″ of water per week.

Letting them dry out can affect how many flowers you will have next year, so it’s important to make sure they are getting their water requirement.

The easiest way to make sure this happens is to install a soaker hose watering system with a timer that is scheduled to automatically turn on the water for you. Doing this yourself isn’t as hard or as expensive as it sounds.

Some gardeners plant companion plants (such as Impatiens) beneath their Rhododendrons. When the soil is getting dry, the Impatiens will wilt and let you know that you need to water. 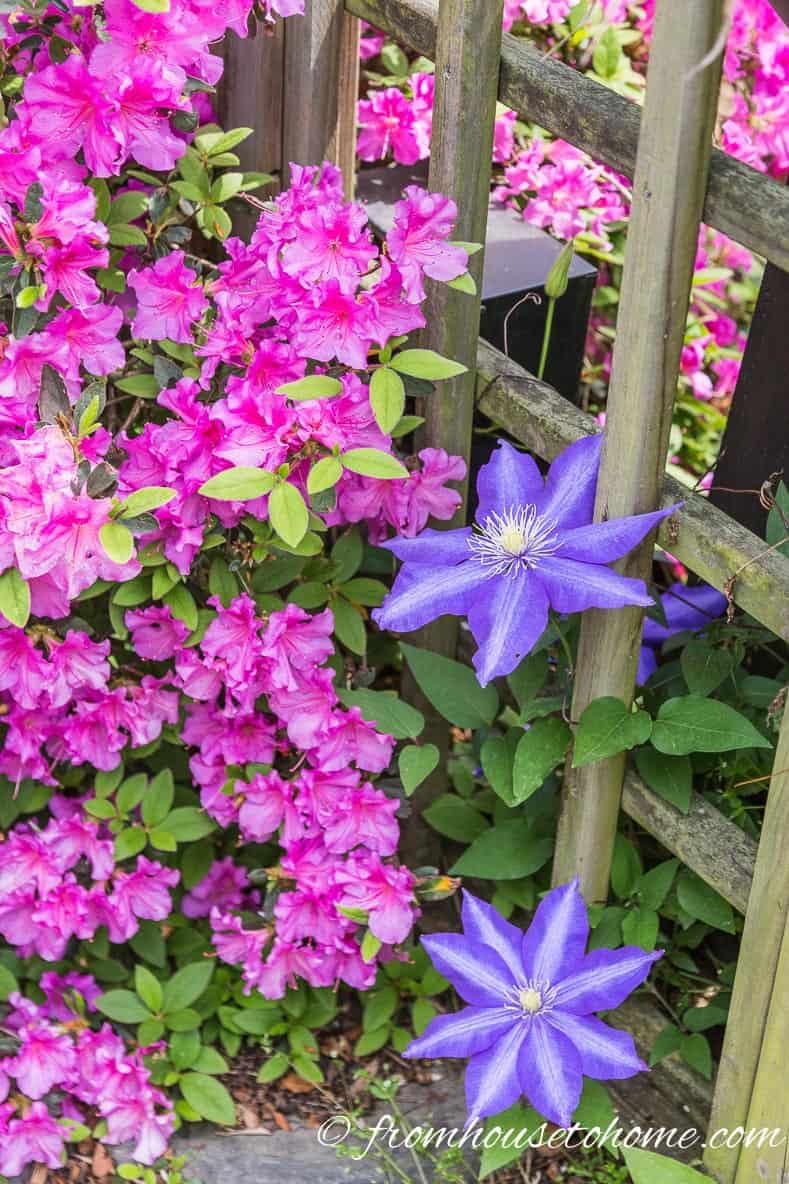 However, on the other end of the spectrum Rhododendrons also don’t like to be standing in water or their roots will rot.

In my area of the country, we have very hard clay soil (which is notorious for not letting water drain). Fortunately, Rhododendrons have very shallow root systems, so I am still able to grow them by digging a wide but not too deep hole to plant them in. Then when I’m filling the hole back in, I use a mixture of top soil, compost and peat moss rather than the original clay. 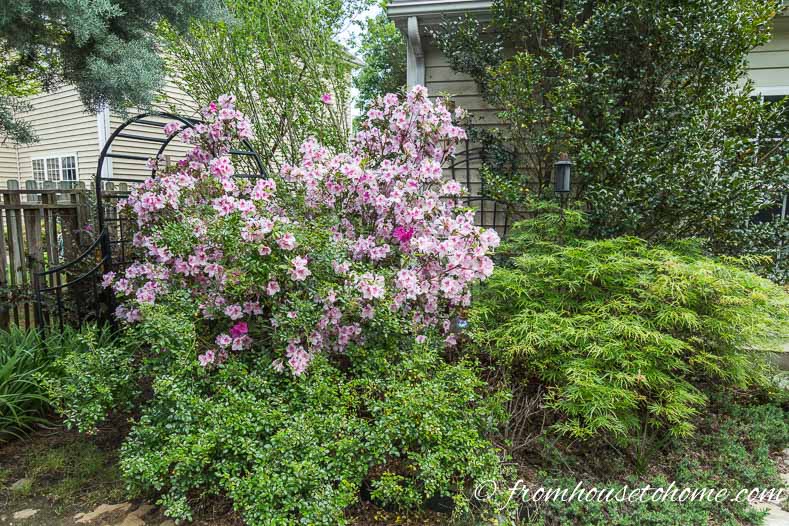 Speaking of those shallow root systems, mulching is very important for preventing Rhododendrons from drying out and getting overheated.

I like to use 3″ – 4″ of ground bark mulch and pine needles. They add organic matter to the soil as they decompose and keep the soil acidity level up. 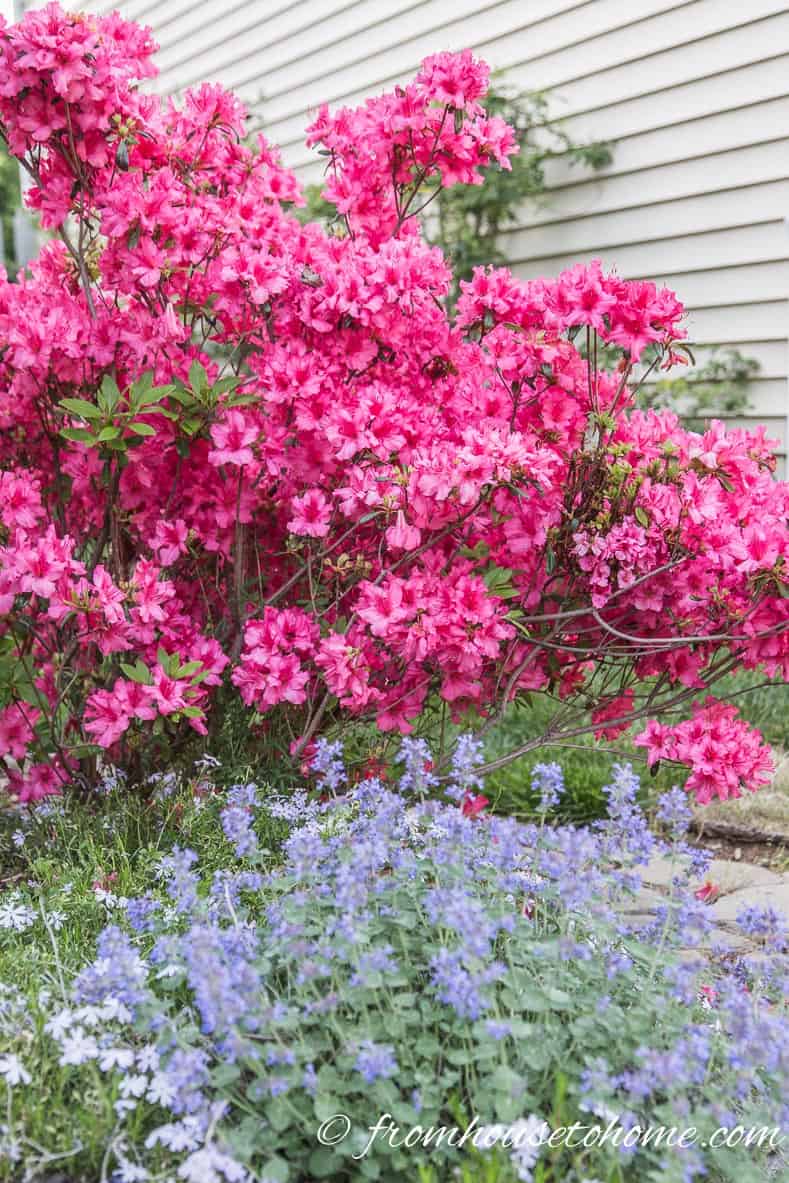 To tell you the truth, I don’t fertilize my rhododendrons at all. With well-amended and mulched soil, I don’t think they really need fertilizer.

But if you do want to fertilize, according to the Kenneth Cox book on Rhododendrons and Azaleas*, you should do it early in the spring before the plant has started blooming.

That will promote beautiful flowers. Apparently, fertilizing after your Rhododendron has finished flowering promotes more leaves at the expense of next year’s flowers. 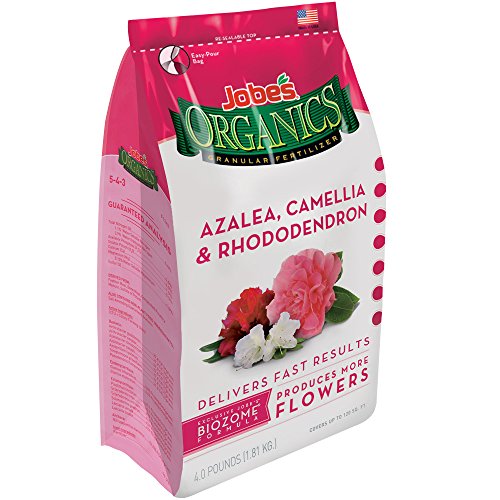 Since Rhododendrons do have such shallow roots, they are easily damaged by chemical fertilizers, so don’t apply too much. 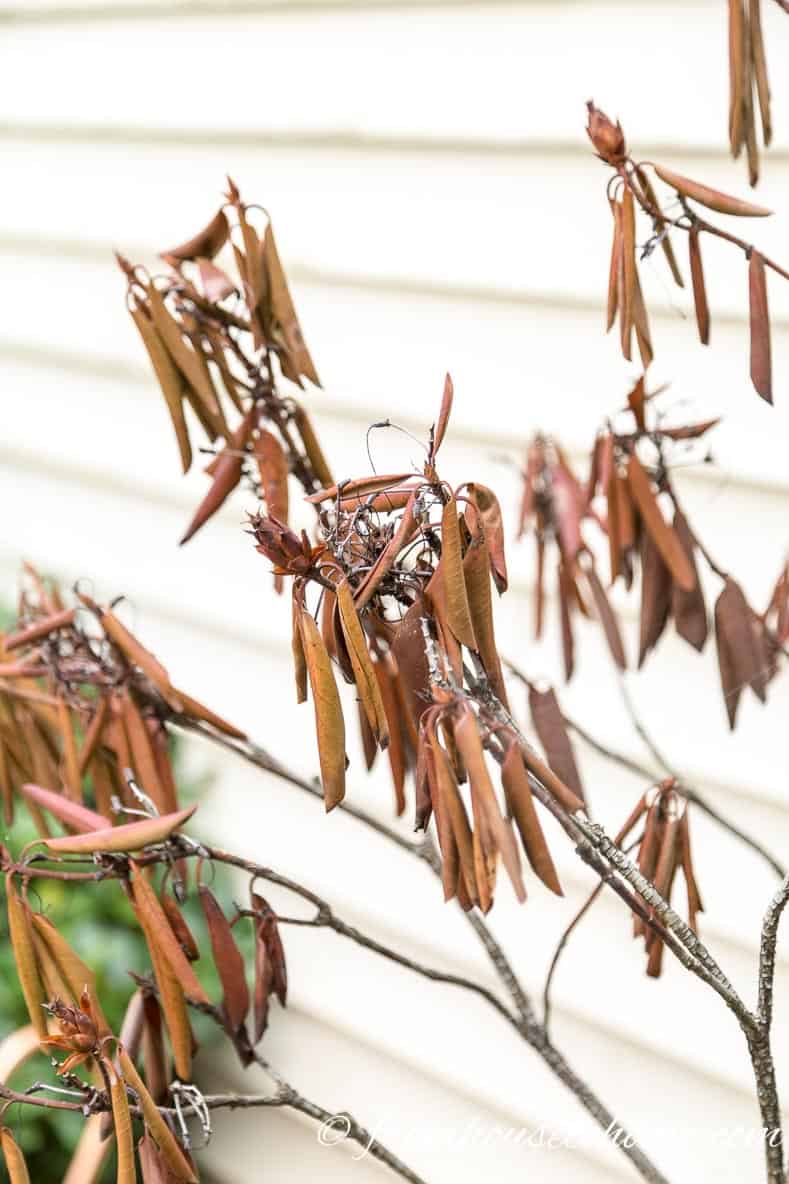 Pruning isn’t really required for Rhododendrons and Azaleas. Basically, the only time I do anything to them is to cut off any dead or diseased branches. (If you have any branches that look like this, you might want to check out our information on Rhododendron diseases).

If you do need to prune your plant for some reason, do it as the flowers are fading.

Next year’s buds start forming right beneath this year’s flowers immediately after the flowering has stopped. So if you wait until the blooms are done, you will probably end up with no flowers next year. 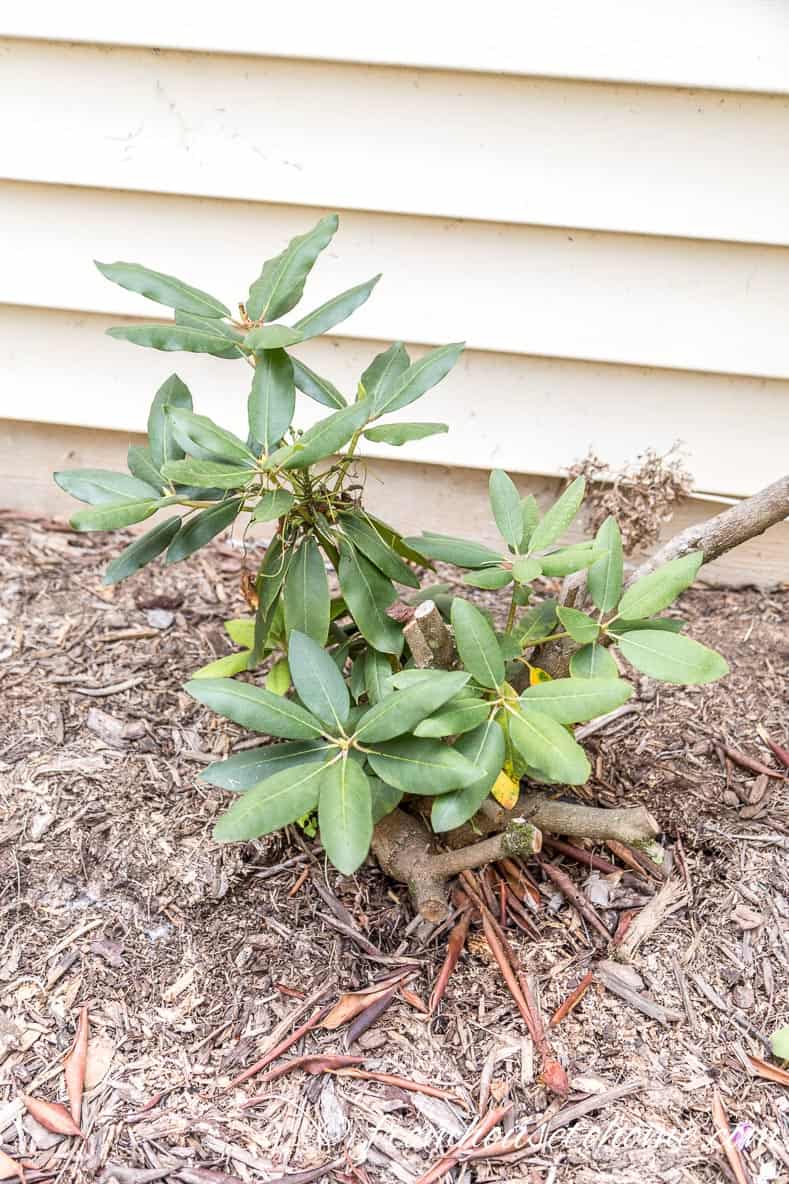 If a severe pruning is necessary, you can cut the stems down to 12″ – 15″ above ground, and it should come back.

One of my large Rhododendrons didn’t do well in the drought we’ve had for the last couple of years, so I ended up cutting it right back.

And this year it started putting up new healthy-looking shoots.  These bushes really are pretty tough! 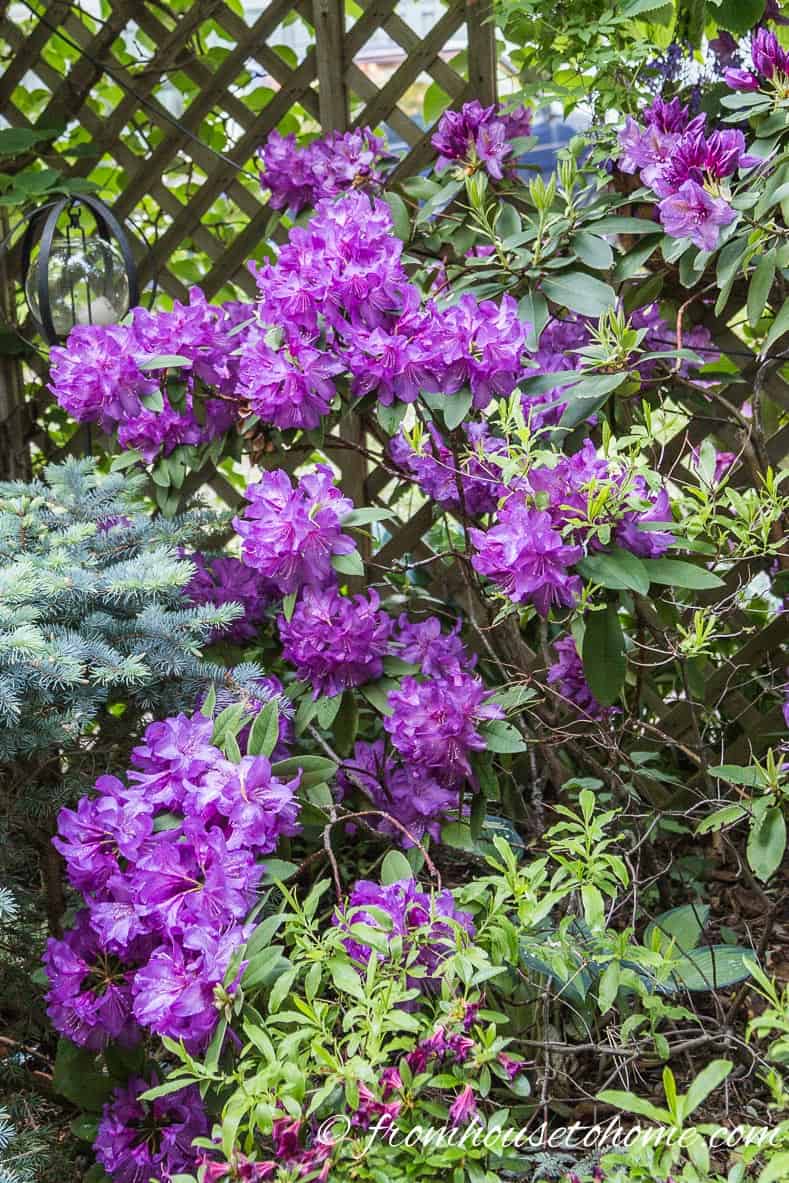 For the leather-leaved, large-flowered Rhododendrons (like R. catawbiense), removing the flowers after the plant has bloomed will encourage it to spend its energy creating new buds for next year instead of growing seeds. 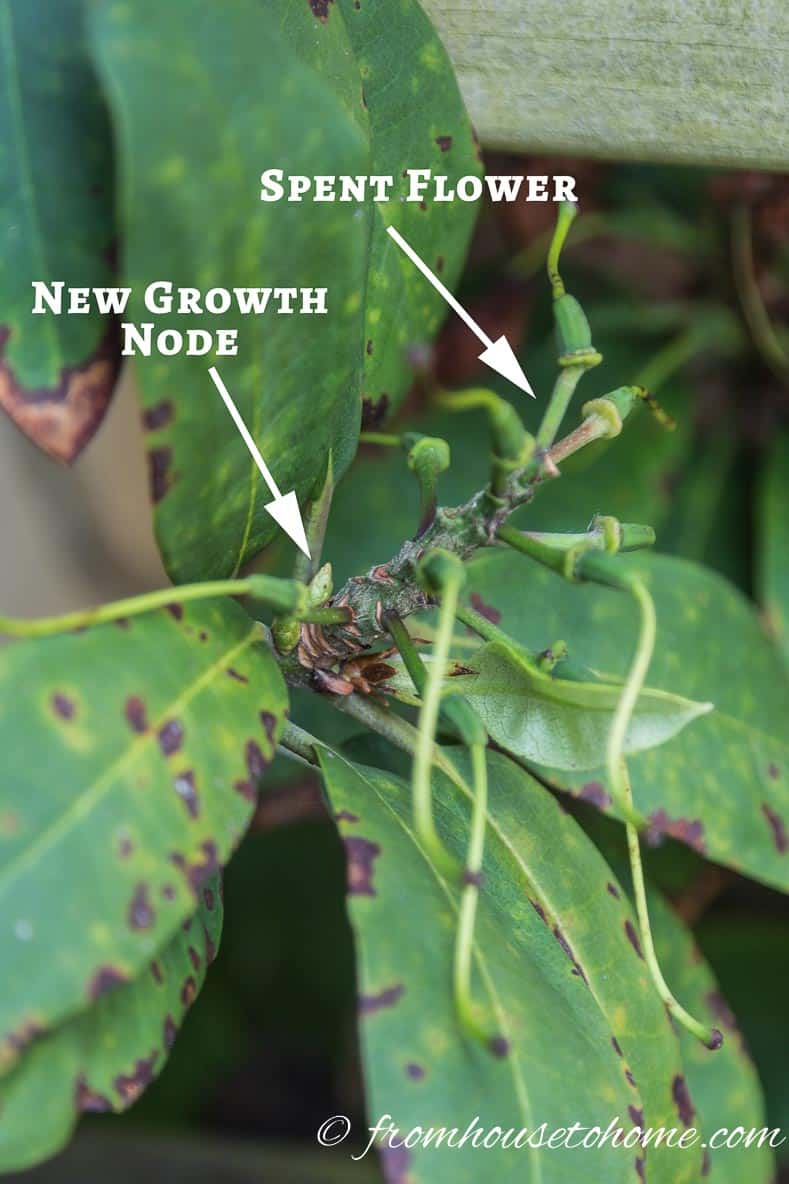 To do this, you can use pruning shears or just break off the flower head from the stem with your fingers.  However, be careful to only remove the flower head (no leaves).

As you can see in the picture, the new growth that contains the buds for next year’s flowers will develop immediately below this year’s flowers so you don’t want to remove them by accident.

For more details on deadheading Rhododendrons, watch this video:

Having said this, I don’t usually get around to deadheading mine and they still put on a pretty good show every year 🙂

For the small leaved varieties such as the PJM Rhododendron and most Azaleas, deadheading isn’t necessary at all. 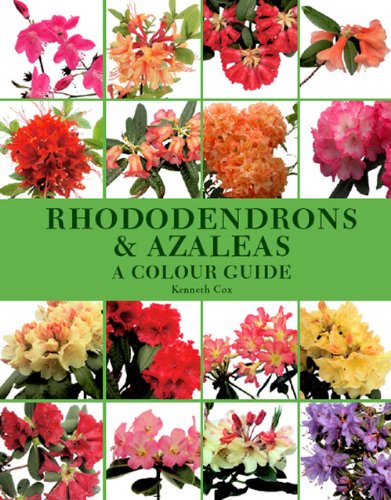 If you’re looking for a really great book on Rhododendrons and Azaleas, this one by Kenneth Cox* has a lot of in depth information. Plus a whole bunch of beautiful Rhododendron pictures to help you find the one you want (or identify the ones you already have).  It is a British book so some of the spellings and references are a little different, but the Rhododendron information is top notch. 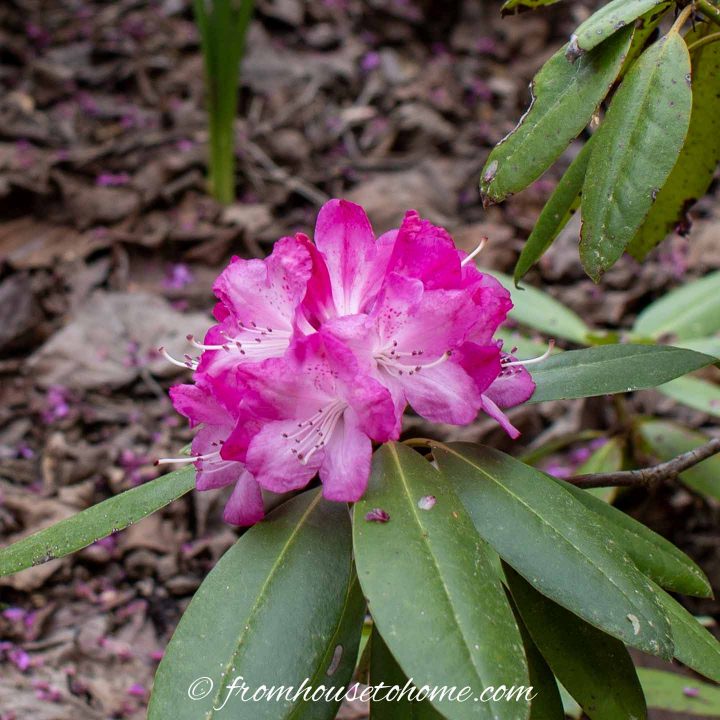 Hopefully you now have all of the Azalea and Rhododendron care information you need to get them growing well in your own garden.

Have comments or questions on Rhododendron care? Tell us in the section below. 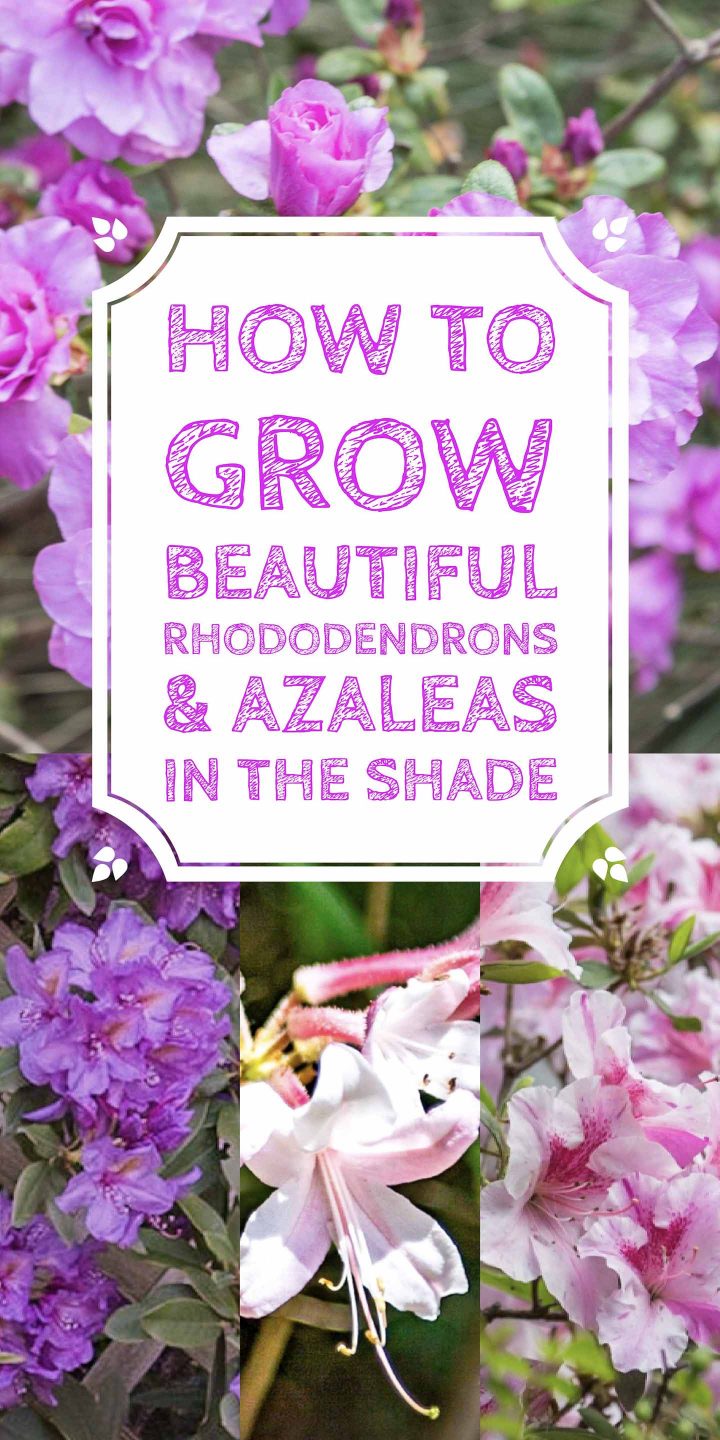