Need to hide your neighbor’s shed or soften the lines of a fence or trellis? These flowering vines for shade are the perfect solution…they’re pretty and practical. 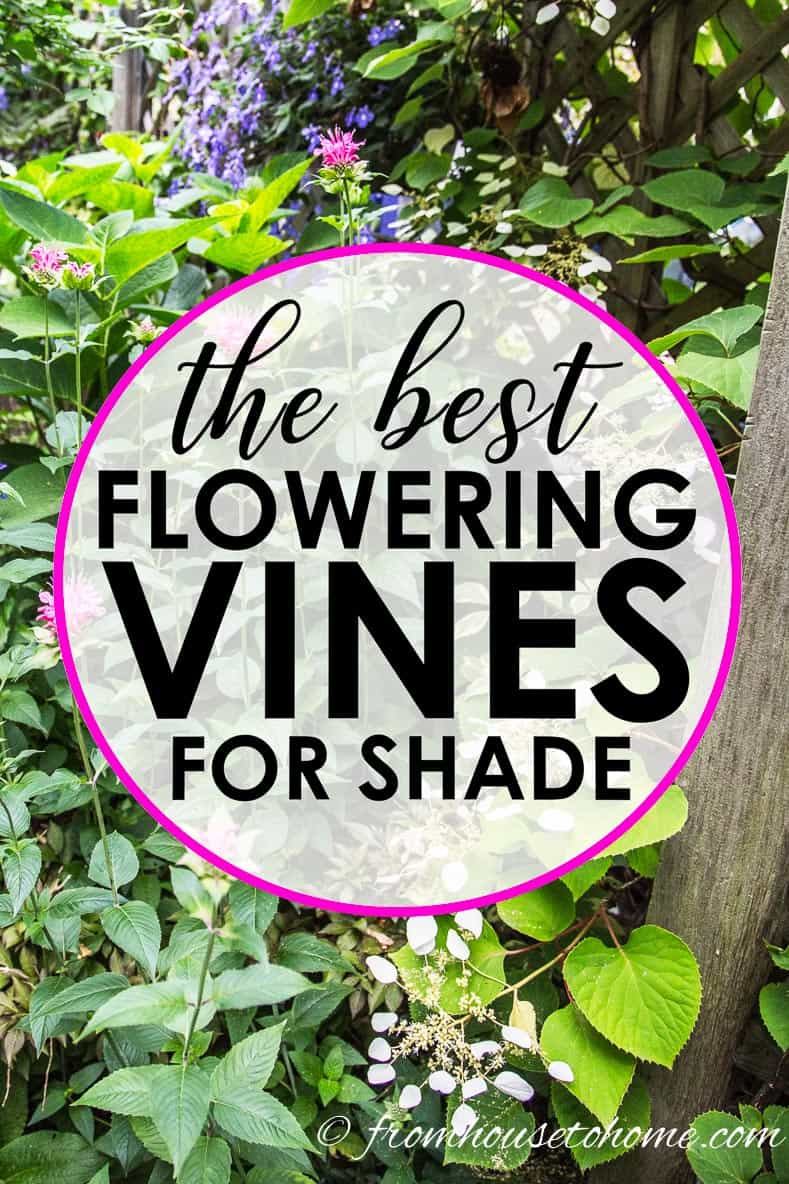 When I first moved into my house, as with most new construction builder-grade houses, there wasn’t an inch of shade to be found. Being out in the yard in the summer with that sun beating down felt like being in an oven. In fact, the yard was so devoid of life that the backyard didn’t even have any grass!

Of course, being someone who loves to garden, I couldn’t have a yard with no plants! So I set out to create some garden beds. And to help out with the shade situation, I made sure to plant a lot of bushes and small trees that would help cool things down a bit.

I had just moved to South Carolina so I had no idea how fast everything grows here compared to Toronto…and I can tell you, the longer growing season definitely makes a difference!

So now my hot as blazes full-sun yard has turned into a much cooler, mostly shady garden. And that mean finding plants that thrive in the shade to replace the sun-loving varieties that aren’t doing so well anymore.

Like climbing roses. I used to grow them up the fence and over arbors to add some color and block my view of the neighbor’s shed, but they don’t do very well with so little sun. So I’ve been looking for some flowering vines for shade that can take their place. And I’ve discovered that finding shade vines which aren’t invasive plants is actually pretty hard.

But after doing some research I’ve finally been able to come up with a list of flowering vines for shade that I should be able to grow without creating a whole bunch of extra work for myself. (I strive to have a low maintenance garden!) Keep reading to find out what they are.

Climbing hydrangeas are notoriously slow to get started, and can take up to 5 years to get going. I was about to give up on mine when it finally took off!

However, once they do start to grow, they are worth the wait!

Imagine a whole wall of lacy white flowers, because that’s what you’ll have if you’re patient. They are rather heavy plants and can grow very tall so make sure you have them planted on a sturdy structure

Click HERE to find out more about Climbing Hydrangeas. 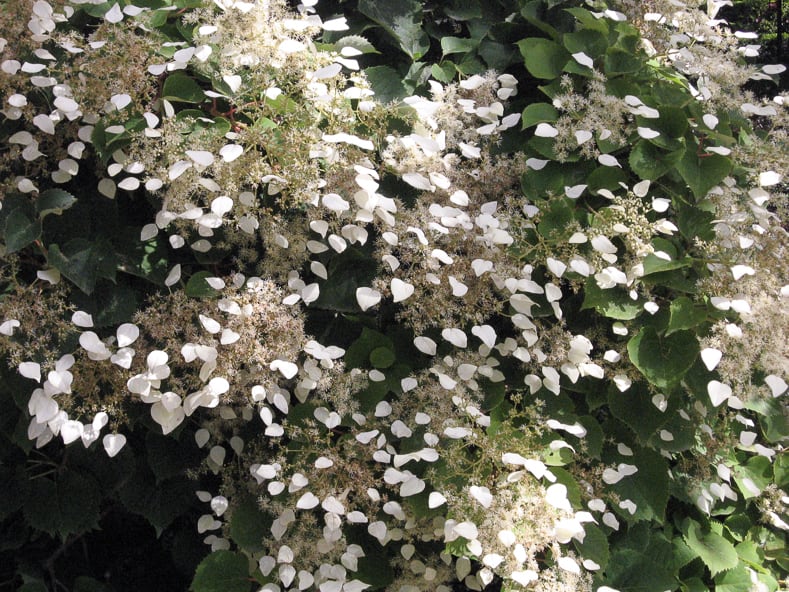 Japanese Climbing Hydrangea by A. Barra (Own work) [GFDL or CC BY 3.0], via Wikimedia Commons

The most common variety ‘Moonlight’ has white flowers, but there is also a pink-flowered version (‘Roseum’).

If you are looking for a shade vine for the North side of your house, this could be the plant for you. 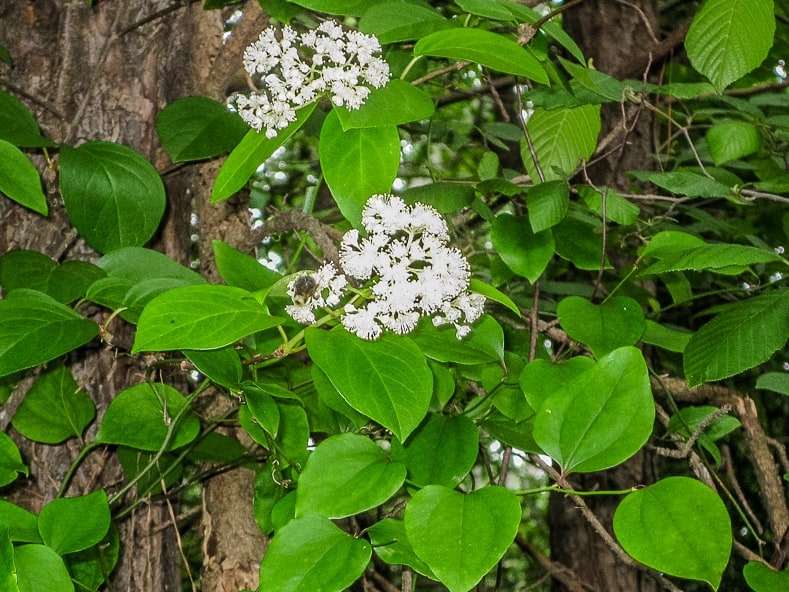 Are you sensing a trend here? The different versions of Climbing Hydrangeas are very popular shade vines!

This Climbing Hydrangea, also known as Woodvamp, is native to the Southeastern United States and is another beautiful flowering vine for the shade.

Its blooms are not as large as the cultivated climbing hydrangeas but they still put on a show.  And apparently, the butterflies love it!

Click HERE to find out more about the native climbing Hydrangea.

Okay, that’s it for the Climbing Hydrangeas.  Now onto Clematis…one of my all time favorite plants!

There are Clematis varieties in all kinds of colors and it is generally a very well behaved vine.

It won’t bloom very well in full shade, but almost all of the 27 varieties that I grow in my garden are in part shade and loving it!

One caveat: If you want low maintenance plants, stay away from Autumn Clematis which can be quite invasive.

You can find more information on growing Clematis and the best varieties for your garden HERE. 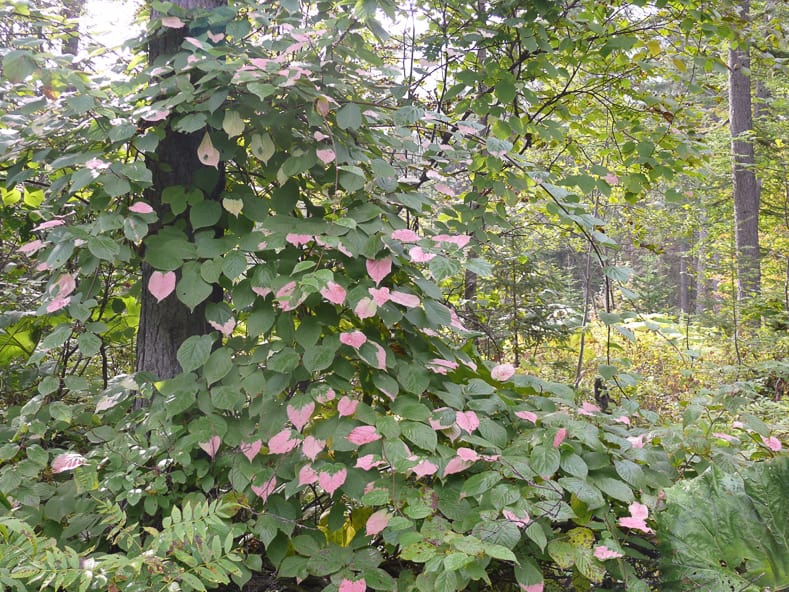 The kiwi vine has small white flowers in the spring but that’s not why most people grow it. In light shade, it produces leaves that are a spectacular pink, white and green combination.

It comes in a female and male version (you’ll need both if you actually want to grow fruit). For the best colors, try to get a male plant since it tends to have better variegation on the leaves than the females. 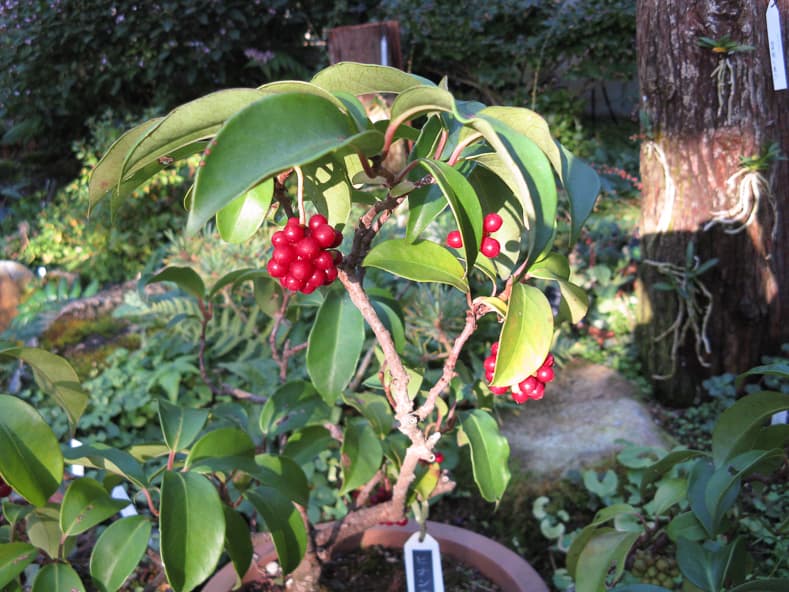 Kadsura japonica by KENPEI (Own work) [GFDL or CC BY-SA 3.0], via Wikimedia Commons

For gardeners that live in warmer zones, Kadsura japonica is a great shade vine to try.

It is a semi-evergreen vine that grows in the shade and produces white or yellow flowers in the spring. But most of the time, it is grown for the beautiful red berries it produces in the fall and variegated leaves that stand out in the shade garden. 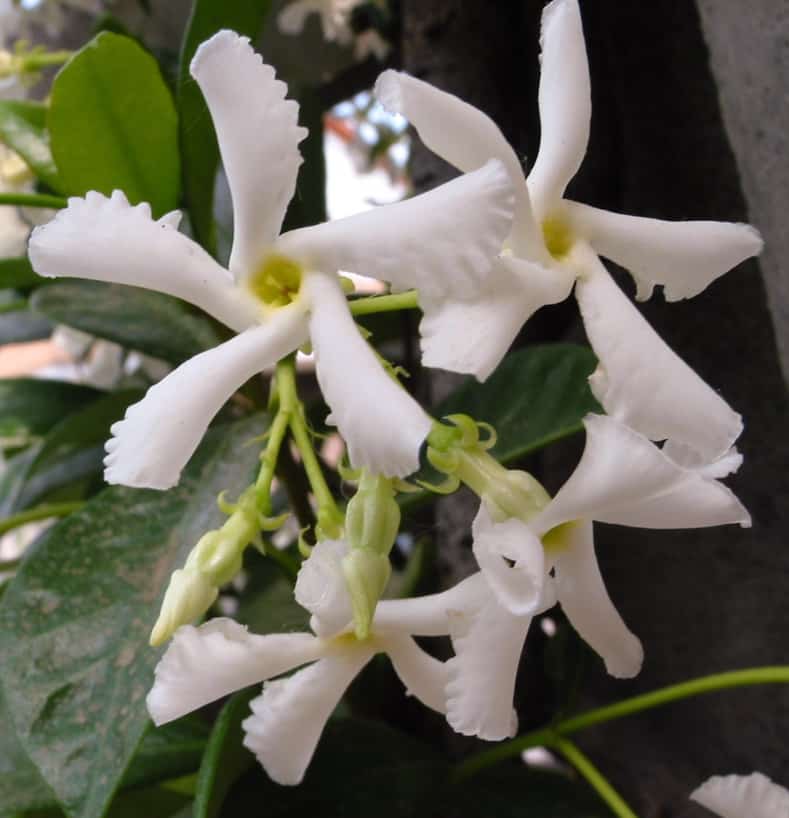 If you live in the South and are looking for a beautiful flowering vine with evergreen leaves that will grow in part shade, you might want to consider Confederate Jasmine. 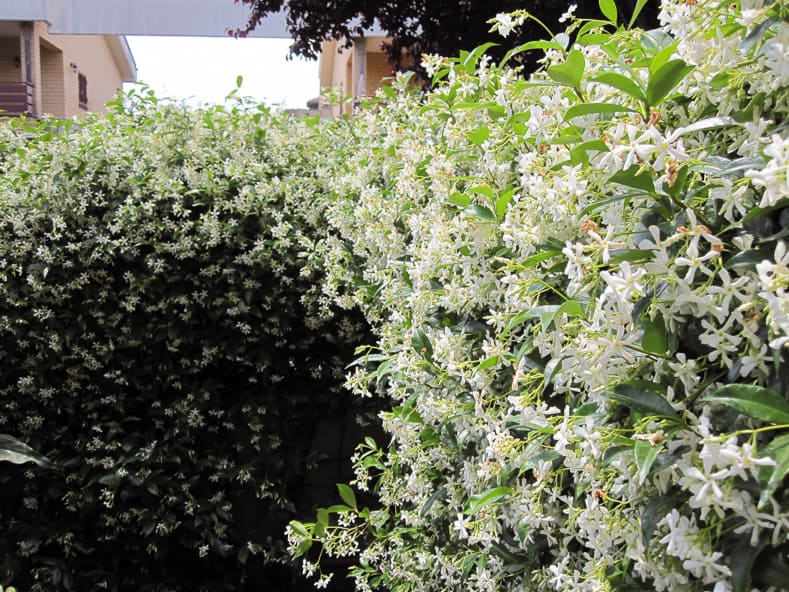 It isn’t picky about the type of soil it is planted in, puts on a big show in the spring and smells heavenly! 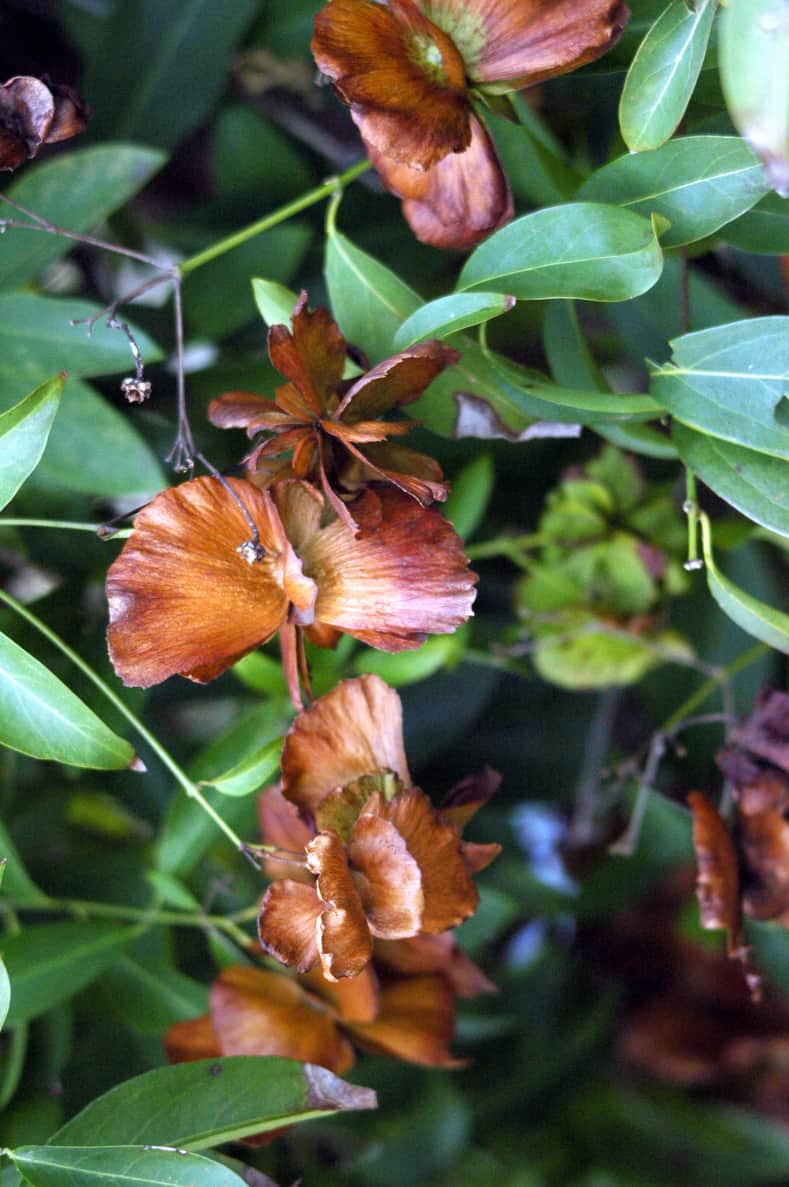 The butterfly vine is a fast growing climber that will grow in part shade and produces yellow flowers from spring to frost.

It gets its common name from the papery seed pods that are shaped like butterflies.

Although it is perennial only in the warmest zones of North America, it grows fast enough that it can be used as an annual vine further North.

Click HERE to find out more about the butterfly vine. 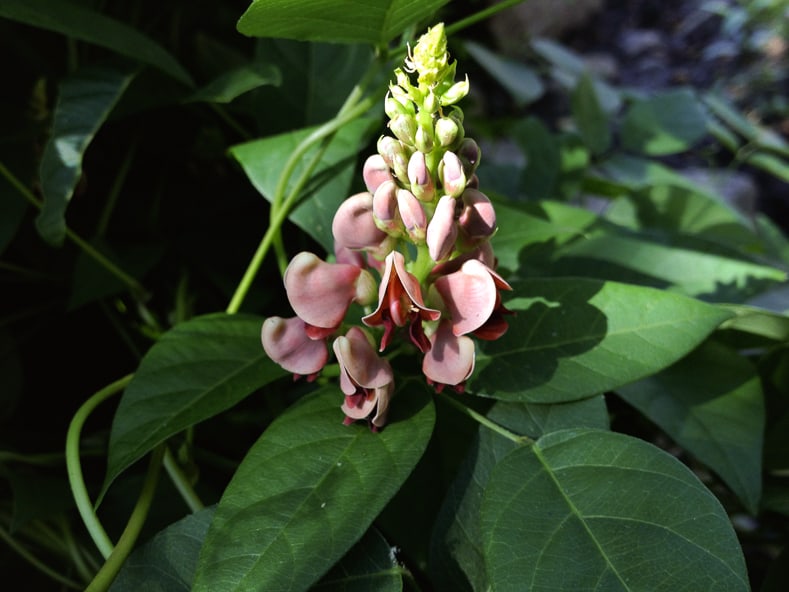 Groundnut by Fritzflohrreynolds (Own work) [CC BY-SA 3.0], via Wikimedia Commons

I was a little hesitant about including the Groundnut (or potato bean) in this list of vines for shade because it can be somewhat aggressive.

But it’s hard to leave it off the list since it’s an easy-to-grow plant with flowers that look like red Wisteria!

Groundnut is a native plant found in Eastern North America that blooms from July to September and thrives in the shade.

As I mentioned above, it can be quite aggressive so you probably don’t want to plant it in the garden bed with your favorite perennials.

But if you have a shady spot where it can spread out, it will put on quite a show.

You can find out more about the groundnut HERE.

That’s it for my list of (mostly) non-invasive vines that grow in the shade.

I know I’m going to try at least a couple of these in mine…and the neighbor’s shed will be gone (at least from view)!

Hopefully, you have found one or two that will make a statement in your garden, too.

Have comments or questions on flowering vines for shade? Tell us in the section below. 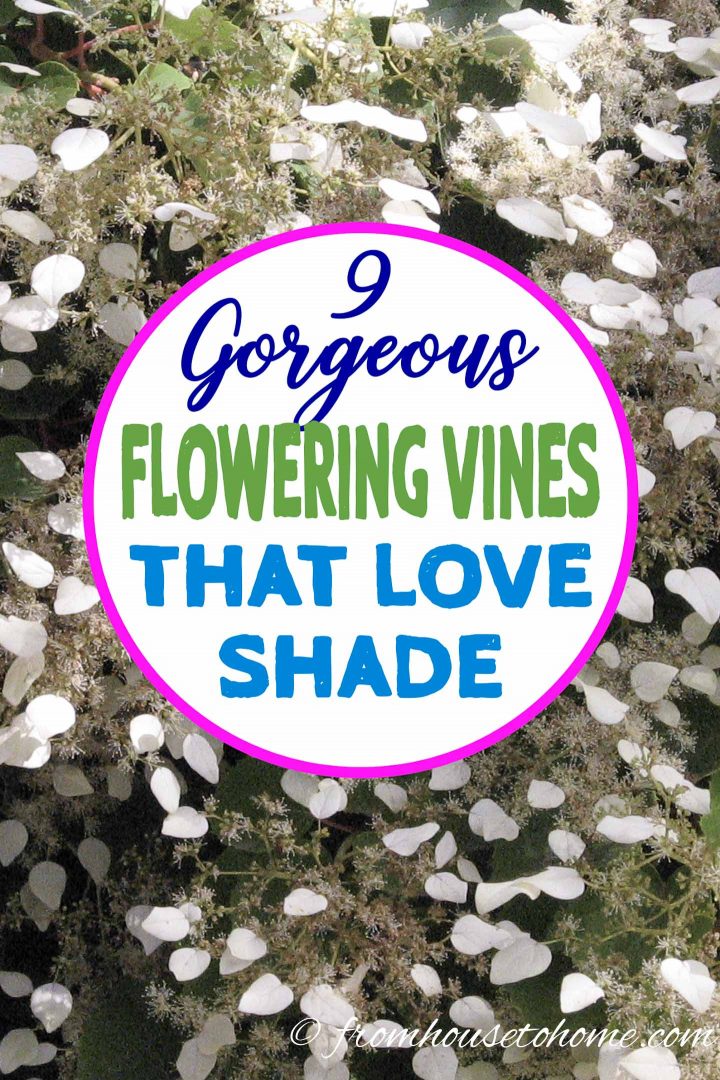 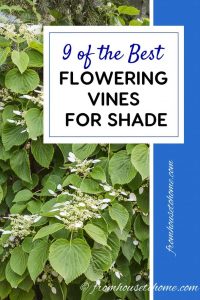 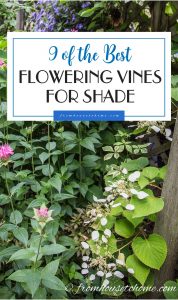 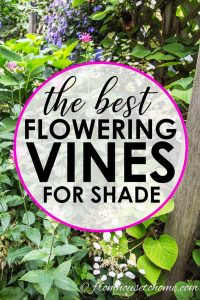 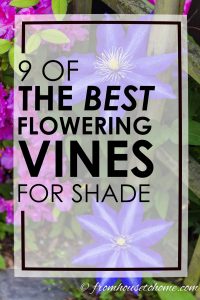 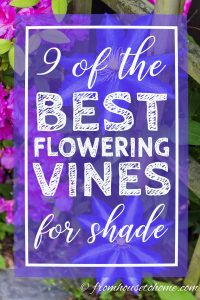 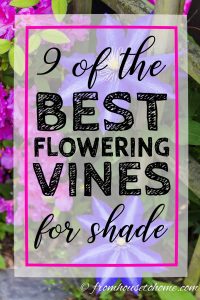 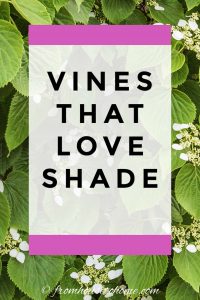 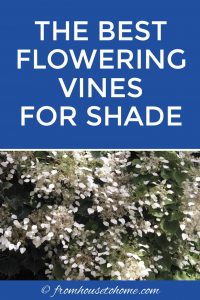 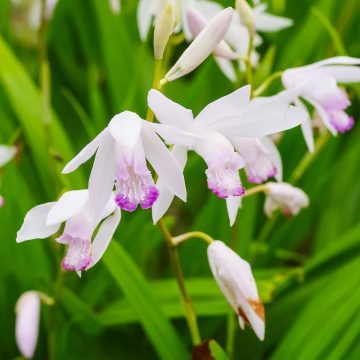 10 Tall Shade Perennials: Flowering Plants That Bloom In The Shade 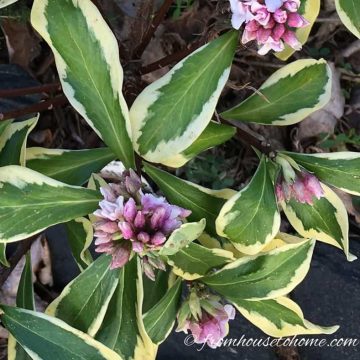 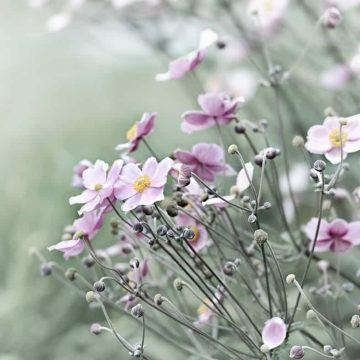 How to Grow Fall-blooming Japanese Anemones 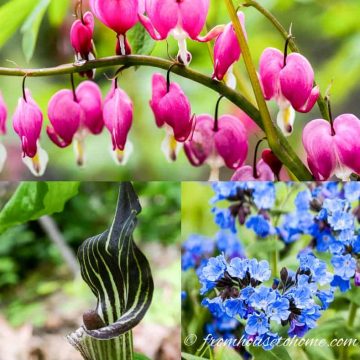 15 Beautiful Deer Resistant Shade Plants To Grow In Your Garden 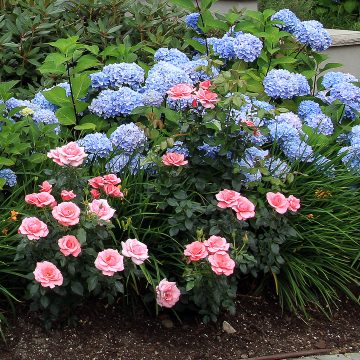 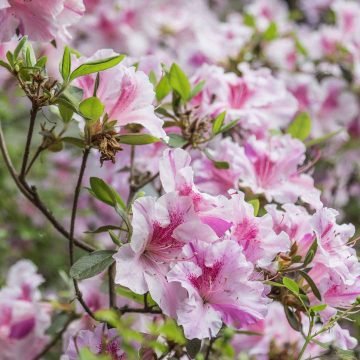